Cheboksary is the capital city of the Soviet Chuvash Republic and a large port on the Volga River. Population: 419,592 (1989 Census)

Some rare photos from SovietEraMusem archive:

END_OF_DOCUMENT_TOKEN_TO_BE_REPLACED

After the Soviet government moved to Moscow in 1918, it nationalized the luxurious estate and converted it into Vladimir Lenin’s dacha. In September 1918, the Soviet leader recuperated there following an assassination attempt. He spent an increasing amount of time there as his health declined over the following years. On May 15, 1923, Lenin followed medical advice and left the Moscow Kremlin for Gorki. He lived there in semi-retirement until his death on January 21, 1924.
After Lenin’s death, Gorki was renamed “Gorki Leninskiye” (meaning “Lenin’s Gorki”). The house became a museum holding many of Lenin’s possessions. Also located on the estate are a large museum built in 1987 concerning Lenin’s life there, containing such artifacts as his Last Testament (as transcribed by Nadezhda Krupskaya), other documents, photos, books, Lenin’s personal car (a Rolls-Royce Silver Ghost), his wheelchairs, and his apartment and office from the Kremlin, reconstructed in a separate building. A monument representing “The Death of the Leader” was unveiled in the 18th-century park in 1958.
SovietEraMuseum exclusive.

END_OF_DOCUMENT_TOKEN_TO_BE_REPLACED

A collection of propaganda trays from Zhostovo factory
“The Moscow Kremlin”(1950), “Lenin is on the hunt”(1948), “cuiser Aurora”(1957) and many others.
SovietEraMuseum exclusive

END_OF_DOCUMENT_TOKEN_TO_BE_REPLACED

The 1968 Summer Olympics (Spanish: Juegos Olímpicos de Verano de 1968), officially known as the Games of the XIX Olympiad, were an international multi-sport event held in Mexico City, Mexico, in October 1968.
These were the first Olympic Games to be staged in Latin America and the first to be staged in a Spanish-speaking country. They were also the first Games to use an all-weather (smooth) track for track and field events instead of the traditional cinder track.
The 1968 Games were the third to be held in the last quarter of the year, after the 1956 Games in Melbourne and the 1964 Games in Tokyo. The Mexican Student Movement of 1968 happened concurrently and the Olympic Games were correlated to the government’s repression.

END_OF_DOCUMENT_TOKEN_TO_BE_REPLACED

The beginning of XX century – a time when mankind has made a leap in technology. Cities electrified, there were telephone, incandescent bulbs. The internal combustion engine is actively used in cars and motorcycles. Actively developing the photo, and with it the cinema. It has become possible to record and play sounds with the help of the phonograph and the gramophone. In medicine: vaccinations, X-rays and blood transfusion. Another significant event is, of course, the appearance of aviation. I visited the interesting exhibition “Aviation. Morning a new era” just about those first steps. I liked the models and photos of gyroplanes, but more on that in the next post. 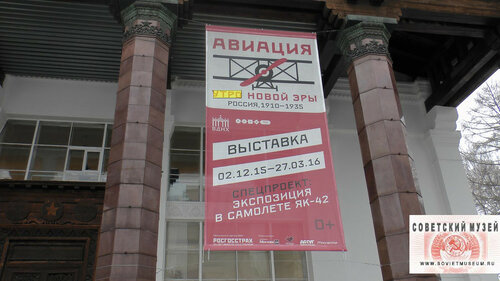 END_OF_DOCUMENT_TOKEN_TO_BE_REPLACED

Zavod imeni Uritskogo (ZiU, named after Moisei Uritsky). It produced thousands of MTB-82, ZiU-5, and ZiU-9 passenger trolleybuses. These and many other Soviet trolleybuses were presented at the exhibition in Gorky Park (Moscow)
Text & Images – Soviet Era Museum.

END_OF_DOCUMENT_TOKEN_TO_BE_REPLACED

Today about famous soviet painter and sculptor Vladimir Tsigal fought not only “weapons of art”, working as an artist in the front paper, but as an ordinary soldier. Patriotic enthusiasm of the Soviet people had a huge impact on his attitude, forever defined the pathos of his work. Diverse motifs of his work, and yet the main theme is the heroism of Soviet soldiers, the Soviet people in the struggle against fascism in the great Patriotic war.
END_OF_DOCUMENT_TOKEN_TO_BE_REPLACED

The diesel-electric submarine B-396 “Novosibirsk Komsomolets” was built in 1980 to be used as part of the Northern Fleet and sail to the Mediterranean Sea, North and South Atlantic, western coast of Africa, in the Barents and Norwegian Seas. The submarine was decommissioned in 1998 and exhibited in the Naval museum in 2006. Look at exclusive photos by SovietEraMuseum

END_OF_DOCUMENT_TOKEN_TO_BE_REPLACED

Gzhel is a Russian style of ceramics which takes its name from the village of Gzhel and surrounding area, where it has been produced since 1802.About thirty villages located southeast of Moscow produce pottery and ship it throughout Russia. The name Gzhel became associated with pottery in the 14th century. Gzhel pottery was originally created by potters in their homes, however fairly early on these potters started to organize into workshops to increase production. The workshops eventually became a factory with pieces being formed in moulds and potters being responsible for separate pieces, a specific style, or decoration. The earliest pieces were created of earthenware. The pottery was painted solid white with distinctive blue designs. Pottery was also produced using a tin based white glaze and coloured glaze designs in blue, green, yellow, and brown, rather than just blue on a white background, in a style that is referred to as Maiolica. The body colour of earthenware varies depending on the raw materials used, and can range in color from white to brown. It is generally fired at lower temperatures than either stoneware or porcelain, and can remain semi-permeable to water until glazed. Exclusive photos of SovietEraMuseum
END_OF_DOCUMENT_TOKEN_TO_BE_REPLACED