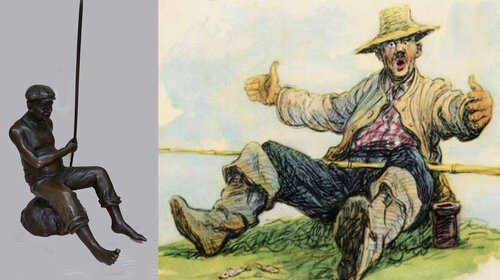 About “The Old Man and the Sea” book:

The Old Man and the Sea is a short novel written by the American author Ernest Hemingway in 1951 in Cuba, and published in 1952. It was the last major work of fiction by Hemingway that was published during his lifetime. One of his most famous works, it tells the story of Santiago, an aging Cuban fisherman who struggles with a giant marlin far out in the Gulf Stream off the coast of Cuba. In 1953, The Old Man and the Sea was awarded the Pulitzer Prize for Fiction, and it was cited by the Nobel Committee as contributing to their awarding of the Nobel Prize in Literature to Hemingway in 1954.

About Ernest Hemingway:
Ernest Miller Hemingway (July 21, 1899 – July 2, 1961) was an American novelist, short story writer, and journalist. His economical and understated style—which he termed the Iceberg Theory—had a strong influence on 20th-century fiction, while his adventurous lifestyle and his public image brought him admiration from later generations. Hemingway produced most of his work between the mid-1920s and the mid-1950s, and won the Nobel Prize in Literature in 1954. He published seven novels, six short-story collections, and two non-fiction works. Three of his novels, four short story collections, and three non-fiction works were published posthumously. Many of his works are considered classics of American literature.